Program for the LanGIS Inspirational Seminar with Prof. William A. Kretzschmar, Jr., Dept. of English, University of Georgia TBD

William A. Kretzschmar, Jr. (Chicago, 1980) teaches English as Harry and Jane Willson Professor in Humanities at the University of Georgia. He also has an appointment at the University of Oulu in Finland (where he received an honorary doctorate in 2013). His major publications include Exploring Linguistic Science (Cambridge, 2018), The Emergence and Development of English (Cambridge, 2018), the Routledge Dictionary of Pronunciation for Current English (Routledge 2017), Language and Complex Systems (Cambridge, 2015), The Linguistics of Speech (Cambridge, 2009), the Oxford Dictionary of Pronunciation for Current English (Oxford, 2001), Introduction to Quantitative Analysis of Linguistic Survey Data (Sage, 1996), and the Handbook of the Linguistic Atlas of the Middle and South Atlantic States (Chicago, 1994). He is Editor Emeritus of the Linguistic Atlas Project, the oldest and largest American research project to survey how people speak differently across the country. During his 34 years as Editor, he reinvented the Atlas with quantitative methods and GIS, presented online on the project Web site along with digitizations of all surviving Atlas audio interviews. He has been an active grant-funded researcher, most recently for the National Science Foundation ("Automated Large-Scale Phonetic Analysis"). He also maintains a community-language field site in Roswell, GA, which became the first American member of the European Union's Living Laboratories network. These interests branched naturally into corpus linguistics, where he directed corpus and text encoding activities for a National Cancer Institute grant to study tobacco documents, and into style and text analysis as shown by his special issue of Language and Literature (2001) on literary dialect analysis with computer assistance. In all of these interests he has brought new quantitative methods to bear on empirical evidence, often at large scale (Big Data). He has been influential in development of digital methods for analysis and presentation of language variation, and has helped to create DigiLab (a Digital Humanities laboratory) to expand work in the area at Georgia. His current line of research argues that human language is a complex system as discussed in physics, evolutionary biology, and other fields, and he has described how the nonlinear, scale-free dynamics of complex systems can be found in speech and how this evidence should change our understanding or grammars, speech communities, cognitive patterns, and other aspects of linguistics. He edited Journal of English Linguistics for 15 years, and has been President of the American Dialect Society. He serves as a board member or consultant for various journals and dictionaries, including preparation of the American pronunciation model for the online Oxford English Dictionary and other Oxford dictionaries. In 2014 he held an ACLS Digital Innovation Fellowship to work on computer simulation of diffusion in language and culture, and in 2019 has been awarded a Fulbright Distinguished Chair to teach in Poland. Kretzschmar was born in Ann Arbor, Michigan, in 1953, and grew up near Milwaukee, Wisconsin. His undergraduate (Michigan, 1975) and masters (Yale, 1976) degrees were in Medieval Studies, where he specialized in literature and also developed facility with historical and modern languages.

The common method to evaluate F1/F2 plots for phonetic analysis is with an ellipse (after Labov 2008): 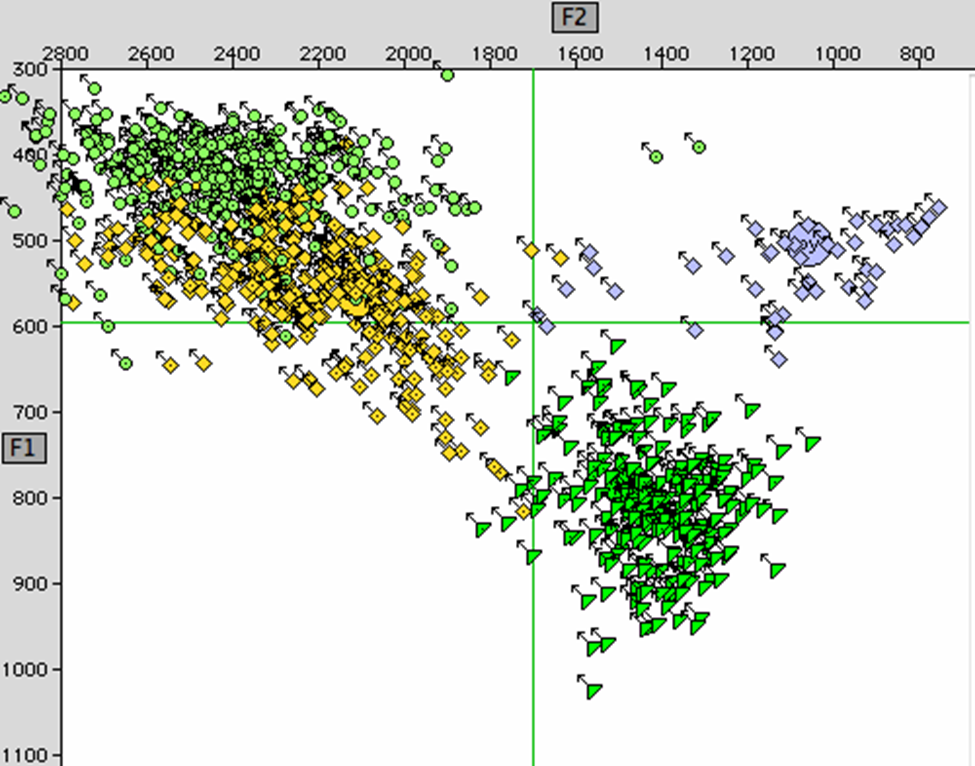 This technique assumes that there is a target for realization of each vowel in the vowel system, and the ellipse either encloses all of the F1/F2 measurements taken for a vowel, or encloses the measurements that fall within a certain confidence interval, as in these examples from Harrington in Hardcastle, Laver and Gibbon 2010:

Confidence intervals assume that measurements for a vowel are normally distributed around the target. Indeed, acoustic phoneticians often take the mean values for F1 and F2 from a set of measurements and plot just the means. However, another possible method to analyze measurements in F1/F2 space is to overlay a grid, a technique from GIS called point pattern analysis. As shown here from our current project in automated vowel measurements from a large set of recordings (Miller et al. 2017), point pattern analysis in F1/F2 space shows two things: first, that variation in measurements for a vowel is greater than often assumed, and second, that the variation is not normally distributed around a target. 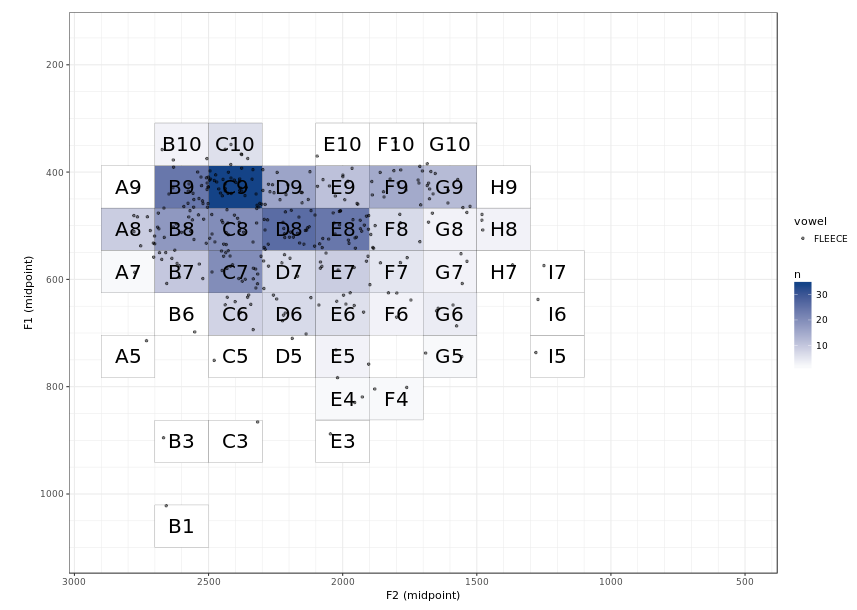 The mean value occurs in grid unit D8, but as the shading indicates, the speaker's most common realization (her mode for this vowel) is in unit C9, and other units have density values equivalent to D8 (B9, E8). The density values of the point pattern grid are not normally distributed, but instead have a nonlinear pattern:

The top ten (darkest) grid units have 61% of the measurements, and these occur from columns B to G, and rows 7 to 9. There is a large number of measurements outside of this area, in units with small densities. Thus, our GIS technique shows that the common assumptions for phonetic analysis are not correct, that use of mean values can be misleading. Point pattern analysis shows that speakers do not have a target for vowel realization in the way usually assumed, and that different speakers and environments can have quite different patterns of realization.

Labov, William. 2008. The Mysterious Uniformity of the Inland North. Paper given at  Methods XIII, Leeds.